Topography and geology along the Japan-Korea tunnel

Strata are generally harder and more stable as older strata are formed by the accumulation of sediment, which is solidified by pressure over many years.The formation just below the seafloor is freshly deposited sand, often not yet rocky.The strata around the Japanese archipelago are complicated because of their relatively new formation and active volcanoes and seismic activity.

The following conclusions can be drawn based on the geological surveys so far.
(XNUMX) As a prerequisite for route selection, the route standard must be decided.Cars, trains, linear motor cars, etc. can be considered as running bodies running in the tunnel, but the route standard differs depending on each case.
(XNUMX) There are concerns about the ergonomic limits of the driver when driving in a super-long tunnel by car.In addition, the linear motor car has just entered the testing stage, and it seems that it will take some time before it is put into practical use.

Therefore, at this stage, we decided to use the route standard assuming the most realistic Shinkansen tunnel.
In particular,
① Maximum gradient is XNUMX/XNUMX (XNUMXm head at XNUMXm),
② The minimum curve radius is XNUMXm
This can be fully adapted even if it is replaced with a road tunnel. 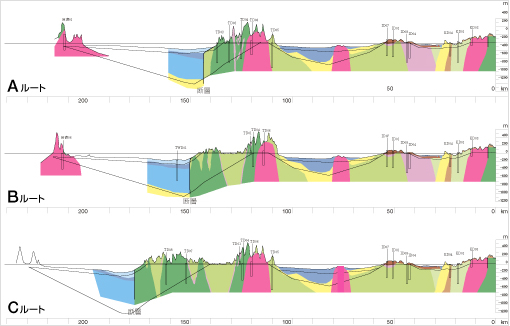 The biggest problem in selecting the route for the Japan-Korea Tunnel is the existence of a large fault with a deep depression in the Western Channel of the Tsushima Strait and the unconsolidated new sedimentary layer accumulated there. ..In order to correspond to this stratum, the route can be broadly considered in the following two cases.

The first case is through the bedrock beneath the unconsolidated sedimentary layer.In this case, the construction is considered to be relatively safe, but the total length of the tunnel will be longer because it will pass through a considerable depth.As for the construction, it can be excavated by the mountain tunnel method that also uses the experienced rock water stop injection in the Seikan tunnel.The second case is to pass through the unconsolidated layer, and the shield method will be used.In this case, the depth of the tunnel becomes shallower, and the total length becomes shorter accordingly.However, shield construction under large water pressure exceeding XNUMX m is unprecedented, and there are many technical issues that need to be resolved.

In any case, it seems that excavation is possible from Kyushu to Iki by the mountain tunnel method of digging rock.The problem is that the excavation method is divided into two types depending on the properties of the new sedimentary layers existing in the eastern and western waterways of the Tsushima Strait.

Based on the above geological conditions, tunnel routes as shown above are currently being proposed.This is a geological plan from Kyushu to Geojedo Island in South Korea.By the way, Route C is a route that directly lands in Busan, but it has the disadvantage that the total length is very long.Here, I would like to explain the geological condition only for the routes that land on Geojedo.

In the eastern waterway between Iki and Tsushima, there is a reef called Shichiriga Sone in the middle, and igneous rocks are expected to exist around it.Most of the geology is the Katsumoto Group on the Iki side and the Tsushima Group on the Tsushima side, but there is a part of the new sedimentary formation between them, so if you try to avoid it, the tunnel will dig quite deep. It will be.

Most of Tsushima is the Tsushima Group, and there is a large granite body in the south, and the surrounding area is hornfels.Hornfelsification is the alteration of rocks by the action of heat.Since granite has heat, the surrounding formations that it touches are exposed to heat.Hornfelsized rocks are very hard.

A large fault runs parallel to the coast off the west aqueduct of Tsushima, and the bedrock is deeply depressed on the west side, and a new sedimentary layer is deposited on it.This new sedimentary layer has been deposited on the seafloor as if it were snowfall, from the time of the Tertiary Pliocene more than XNUMX million years ago, or from older to the present.It is still in the process of diagenesis and has not become a rock.Therefore, it contains a large amount of water and is considered to be extremely soft.

There are two ways to pass through this area: excavating the inside of the sedimentary layer by the shield method or excavating the bedrock below it by the mountain method.The deepest part of the West Channel is XNUMXm deep, and if it is a tunnel that runs through the bedrock, the depth can be XNUMX-XNUMXm.This bedrock seems to be shallow at an elevation angle of about XNUMX degrees toward South Korea.

Based on such a geological condition, the problems expected at the time of construction are summarized as follows.

First of all, in the Kyushu area, there are places where granite is weathered and looks like a lump of sand, and if groundwater is included, it may easily collapse.Igneous rocks are distributed on the seabed of Iki Suido and Higashi Suido, where sudden springs can occur.

In Iki and Tsushima, water resources are limited, and they rely on groundwater for domestic, agricultural, and fishing water.Therefore, it is necessary to take care so as not to affect the use of groundwater as much as possible.In addition, how to deal with the unconsolidated new sedimentary layer under the seafloor of the West Suido can be said to be the biggest problem related to the entire tunnel plan.

The geological surveys that have been conducted so far have been rough and qualitative, so in the next stage, concrete and quantitative surveys that are deeply involved in the examination of design, budget, and construction methods will be required. ..Therefore, future issues can be summarized into the following four.

(XNUMX) First, strengthen the elucidation of the engineering properties of the geology along all routes of the land and seabed.

(XNUMX) To understand the hydrogeological conditions in each region in order to deal with groundwater problems in the land areas of Kyushu, Iki, and Tsushima.

(XNUMX) To understand and evaluate the geological and engineering properties of the new sedimentary layers in the East and West Channels.

(XNUMX) To understand and evaluate the distribution and structure of geology on the seafloor and their engineering properties.

Regarding the geology of the land area, we will continue to compare the stratigraphy of each area in order to clarify the geological structure between Kyushu, Iki, and Tsushima.At the same time, hydrogeological surveys will continue to be conducted.In addition, we plan to conduct geotechnical studies on both the land and seabed, which correspond to the construction method.