If the leaders of both countries agree on the construction of the Korea-Japan tunnel, the existing conflict problem can be resolved at once.

"Korea-Japan tunnel evangelist" Kim In-ho, chairman of the Trade Association, "great success" while going back and forth between the two countries 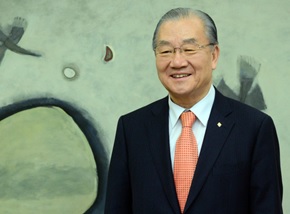 On this day, Chairman Kim gave a lecture at Waseda University's Ifuka Memorial Hall to more than 200 students and faculty members about "the recognition and role of young intellectuals from both countries for the joint prosperity of Korea and Japan in the 21st century."

In his speech, Kim emphasized that "economic prosperity continued when the two countries were in mutual benefit and cooperation in the history of more than 1500 years," and "the two countries share the ideals of democracy and market economy / international cooperation." Therefore, we must work together to achieve economic integration toward the vision of the Korea-Japan community in accordance with the historical demand for the formation of an East Asian economic zone. "

He also cited the conclusion of the Korea-Japan Free Trade Agreement (FTA) negotiations, the revival of the Korea-Japan Economic Ministerial Meeting, the establishment of regular policy dialogue channels, and the expansion of private exchanges as measures for joint prosperity between Korea and Japan. ..

Prior to this, Chairman Kim was noted for his remarks related to the Korea-Japan tunnel in a joint interview conducted by JoongAng Ilbo and the Nihon Keizai Shimbun on April 4 at the Samseong-dong Trade Center in Seoul.Kim, who served as the advisory chairman of the World Peace Tunnel Foundation, revealed various views on improving bilateral relations in an interview today.

The reason for emphasizing Korea-Japan economic exchange is

South Korea and Japan are the only countries in Asia with a population of 5000 million and incomes of $ 2 or more.It is the best condition for these two countries to cooperate.Historically, both countries prospered when the relationship between the two countries was good.Even now, foreign cooperation and openness are good for South Korea, and it can be a breakthrough for Japan in the lost 20 years (Heisei Great Recession).

The comfort women issue has not been resolved by all the agreements between the governments.We must recognize that we still have emotions.If you try to solve this situation artificially at an early stage, you will end up failing.If economic cooperation is expanded quantitatively and qualitatively, other problems can be solved.

Do you need a Korea-Japan Free Trade Agreement (FTA)?

The Korea-Japan FTA is a must-have path for both countries to go as an economic community.With the global hegemonic and great power protection trade intensifying, cooperation through the Korea-Japan FTF for new industries is more important than ever.

South Korean economy continues to grow at a low rate in the 2% range What economic policies should the next administration take after the May presidential election?

Creating an entrepreneurial nation is the slogan of the Trade Association.This is the way to save the Korean economy.Companies are the protagonists of the economy.So far, the government has been so involved in the economy that many regulations have been created.We must go back to the basics of the market economy and allow businesses to operate freely.Companies must create jobs and become the main body of wealth distribution and welfare.It is enough for the new government to present a vision for corporate revitalization.

The Korea-Japan Tunnel is considered as a complete version of the infrastructure community, which is part of the economic community.Considering the future-oriented relationship between the two countries, the Korea-Japan tunnel is necessary.When this is completed, the construction period will be 10 years or more, and technical exchanges will be frequent.And, as a natural flow, considerable cooperation is required between the governments of both countries, businesses, and finance.By digging an undersea tunnel, the North Korean problem can be solved by economic needs.If the political leaders of both countries agree to build a Korea-Japan tunnel, the existing conflict problem can be resolved at once.

A national leader with a global consciousness must look to the future rather than the past or present.Especially when China shows a totalitarian appearance and suddenly emerges as in recent years, it is South Korea and Japan that can form economic exchanges with the same ideological and philosophical aspirations.It would be nice if the leaders of both countries could see the problem in a slightly larger framework.

(Reporter Cho Joo-hoon)
The original Korean text is translated into Japanese.
The original text can be viewed at the link below or in PDF.

If the leaders of both countries agree on the construction of the Korea-Japan tunnel, the existing conflict problem can be resolved at once.