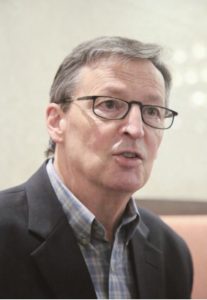 -What is the purpose of this visit to Korea??

In the mid-1990s, he has been in frequent contact with the people of the Korea Democratic Party because of his relationship with the Asia-Pacific Foundation (Asia-Pacific Democratic Leaders Conference, FDL-AP), which was founded by former President Kim Dae-Jung.

The progressive democracy orientation of the Asia-Pacific Foundation, which was President Kim Dae-Jung's policy staff organization, aroused great interest in Washington's politics at the time, and I went to South Korea with great interest and tireless passion for more than 30 years. ..

In terms of the number of times, it will exceed 50 times.Currently, while serving as a visiting professor at George Washington University and the Institute for Korean Studies, he is conducting continuous research with the Keigi Research Institute on the theme of the situation on the Korean Peninsula and North-South cooperation.I visit Korea regularly to advance this research.

If a tunnel is constructed, it will be a Buddhist treasure to ease tensions in the Northeast Asian region.

-Korea-Japan Undersea Tonneル・projectHow do you know and what do you think?

After the North-South summit talks were held on June 2000, 6, a large infrastructure project that connects the South and the North and connects the Korean Peninsula to China and Russia will be promoted, which is even more aggressive. I became interested.

After learning about the Korea-Japan Tunnel Project through the media and acquaintances, I came to think that it would be one of the major international social infrastructure facilities for the realization of peace.

Even if the Japanese and Korean governments do not support the Korea-Japan tunnel project in the current cold relationship between Korea and Japan, the economic and strategic grounds are overwhelming.In addition, tunnel and bridge construction projects have brought about a lot of development in Europe and Asia, and many technical issues have been solved.

-Why do you need a Korea-Japan undersea tunnel?The reason isI want you to explain.

The Korea-Japan Tunnel Project has several purposes that are of great value to both Korea and Japan.This is a big project that allows both countries to get out of the historical controversy and shift to a political focus.

And while imagining the enormous benefits of this project, you will be wondering how much the leaders of both countries will benefit their own country.

In addition, the Korea-Japan Tunnel Project will prove Korea's technological engineering and technical expertise, and show how useful it is, its modern capabilities and even the development of new technologies.

-Korea-Japan tunnelBringLargestIWhat do you think the benefits are?

Perhaps it will ease tensions in the Northeast Asian region.This must be a de facto advantage, as it ultimately affects defense spending and threat assessment.

As a tension relief issue, this project will help new regional armament control agreements.It is also worthwhile to add the Korea-Japan tunnel as a multipurpose corridor connecting the east and west coasts, as it will make it easier for cargo and people to move between Russia, China, South Korea, North Korea and Japan. Will increase further.

The concern of the United States is that Korea and Japan will cooperate economically and strategically.Therefore, it will actively support the Korea-Japan Undersea Tunnel Project.The Biden government has started to support the "Build Back Better Infrastructure Fund for Asia".

Therefore, the Korea-Japan Tunnel Project can be interpreted as appropriate for the United States to support resources and funds.Several US bureaucrats are worried that the South Korean government is so dependent on China that there will be conflicting interests on the Korean Peninsula.

The Korea-Japan Tunnel Project dispels such concerns by showing how the two major democratic camps of Northeast Asia, South Korea and Japan, can strengthen their mutual relations and bring North Korea closer through economic cooperation. Will do.

At the same time, Washington politicians seem to be disgusted by the year-round "Northeast Asian Peace" debate.We will listen if there is a substantive plan that asserts a more strategic approach and rationale.

With the Biden government starting, Democratic politicians seek to create more aggressive and progressive Korea-US relations.It will be judged that it will be beneficial to the United States and will be more actively supported.From this view, it can be said that the Korea-Japan Tunnel Project is a very concrete and logical Northeast Asian peace strategy initiative.

-To those involved in promoting the Korea-Japan tunnelWhat do you want to convey?

Validity research should be continued, and the opinions of the general public should be raised toward the Korean and Japanese governments.It is necessary to pressure the government to do this because it is logical to do it.

In addition, the Korea-Japan Tunnel Project can attract as many people as possible by using political methods to show greater strategic advantages.

North-South relations must be improved quickly.There is no time to waste.The South Korean government must take the initiative in the North Korean issue, including denuclearization, and make its own plans.

In the past, President Kim Dae-Jung insisted on the theory of "peace first, then unification."Regarding peace in Northeast Asia, since the south and north follow parallel lines and it is difficult to form a relationship, mutual assistance of China and Russia in Eastern Europe including North Korea and Western Europe such as the United States and Japan including South Korea A peaceful composition must be set up that both agree.

Each of these strategies will help denuclearize, develop the economy, and ease strategic tensions.

Only close mutual assistance between Korea, the United States and Japan creates peace in Northeast Asia

-Is there a good way to bring North Korea to the international community??

Through the relaxation of sanctions against North Korea, the United States and South Korea hope that China and Russia will be able to elicit new compliance with North Korea's negotiations (after the Hanoi-North Korea US talks).

For the past 20 years, North Korea has been deeply interested in participating in the international community.Relaxing sanctions on North Korea and economic cooperation are the best means for denuclearization and the integration of North Korea's Korean Peninsula and Japan's prosperous zone.

Relieving tension is one of the essential tasks to bring out the mutual benefits of the North and South.The new agreement not only lowers tensions, but also rethinks military spending.

A significant portion of that spending can be used to improve the economic development and quality of life of both South Korea and North Korea.South Korea must play a central role in changing the way the United States deals with the Korean Peninsula.

Therefore, South Korea's strategy for the United States should be carried out by denuclearization, development, military cooperation, etc.

of course.The corona situation has revealed that no country can remain isolated.

North Korea will not be able to survive in the “black hole” of military strengthening and arms race unless the vaccine is disseminated as soon as possible.Corona tells us that all nations must include the corona vaccine in their diplomacy.

-What to students at universityAre you teaching

There are many students at George Washington University who are interested in Korean.Every time I introduce them to the situation in South Korea and Northeast Asia, I can feel the interest and passion that sparkles my eyes.

Cooperation between Korea, the United States, and Japan for peace in Northeast Asia is the development of rational relationships.It begins with the manifestation of trying to coexist in a larger range beyond nationalism, which pursues only the interests of one's own country.When asserting yourself, focus on what the other person is interested in and listens to.

Therefore, themes that can coexist with each other are derived.I emphasize this to young people.

-What was your impression of visiting Korea??

I was most impressed by the Korean people's active participation in COVID epidemics and their efforts to control the virus.Even if the number of coronas increases rapidly, I envy the high public awareness that the public understands and cooperates with national epidemic prevention guidelines such as mask use and vaccination.

The long-term investment in South Korea's public infrastructure is also impressive.Public facilities are clean and modern because the public understands that it is the government's job to create the space in a convenient way for everyone.This is a great lesson for other countries as well.

Please see the linked page for the original article PDF