The "Japan-Korea Tunnel Promotion Prefectural Council" (Chairman: Katsuyuki Kawaguchi, Professor of Nagasaki University) will hold this year's general meeting in Nagasaki City, Nagasaki Prefecture on the 2nd.Yuzo Takeuchi, Chairman of the Technical Committee of the International Highway Foundation (Tokyo), gave a lecture entitled "The Geology of the Japan-Korea Strait and the Japan-Korea Tunnel Learned from the Seikan Tunnel."

The Japan-Korea Tunnel is a concept that connects Korea and Kyushu via Tsushima and Iki.The International Highway Foundation is exploring the feasibility by conducting boring surveys, but there is no concrete prospect for the start of construction.

Chairman Takeuchi worked for the former Japan Railway Construction Public Corporation and was involved in the investigation and design of the Seikan Tunnel (about 54 km) between Hokkaido and Aomori.Introducing the techniques used in the construction, such as horizontal boring, which is said to be difficult, and the chemical injection method to prevent spring water during excavation, "I would like to apply the method of constructing a long undersea tunnel established in the Seikan Tunnel to the Japan-Korea tunnel." And so on. 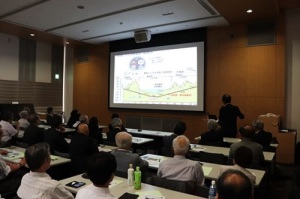