If it opens, it is expected to be a bridgehead for the advancement of Eurasia in the Korean-Japanese civilization area.

・ The Seikan Tunnel in Japan and the Channel Tunnel in Britain and France have already opened ... "Technical capabilities are sufficient"

・ Annual freight volume at the time of opening is 3276 million tons, and 655 million containers

・ Weaknesses include construction costs of 100 trillion won, high freight charges, and a decrease in the flow of goods.

・ Japanese promotion team, "Put the opening ahead even if we invest more human resources and expenses" 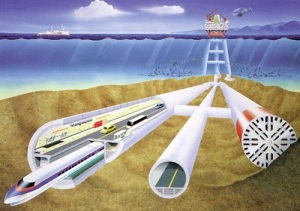 Is the Korea-Japan tunnel politically and scientifically feasible nowadays when the relationship between the two countries has deteriorated due to past historical problems?Are there any safety issues or environmental destruction issues?What are the practical benefits that both countries can obtain other than the "abstract legitimacy" of communication, restoration of relations, and exchange of civilization?I examined the possibility of the "Korea-Japan Undersea Tunnel," which has been repeatedly advancing and retreating for decades over whether or not it will open. 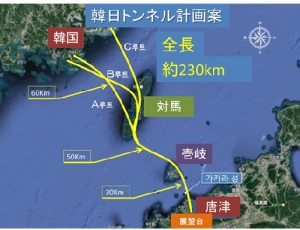 [Graphics = provided by the promotion team]

Japan first embarked on the promotion of opening. After the establishment of the International Highway Construction Corporation in Japan in April 1982, the "Japan-Korea Tunnel Research Institute" was established in May of the following year, led by Yasuo Sasa, an emeritus professor at Hokkaido University.In July of the same year, the Japanese promotion team began surveys on land and in the sea in Karatsu City, Iki, and Tsushima in Saga Prefecture, Kyushu, Japan.

"The possibility of earthquake, inundation, and environmental pollution is small." 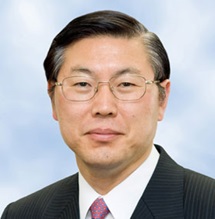 Regardless of the construction period, do you have the technical ability to dig a tunnel?Engineers from both countries, especially the Japanese side, are in the position of "no problem".Japan has already opened the Seikan Submarine Tunnel (a tunnel connecting Japan's Honshu and Hokkaido, length 1964km, submarine section 53.9km) in 23.3. In 1986, Japanese personnel also participated as technical advisors at the start of construction of the Channel Tunnel (a tunnel connecting Folkestone in the south of England and Curry in the north of France, length 49.94km, submarine section 37.9km).Engineers are in the position that the maximum depth of water in the Pusan ​​Strait (Western Channel), the Tsushima Strait (East Channel), and the Iki Strait, through which the Korea-Japan Tunnel passes, is approximately 230 m, and construction can be done using existing excavation methods. I'm taking it.

"Undersea tunnels, whose seismic intensity is reduced to about one-tenth of the ground level, are more resistant to earthquakes than expected. Although it is a large-scale construction, there is almost no marine pollution or fishery damage. The impact is small. The key point is how to deal with the huge amount of surplus soil, waste stones and wastewater, but we are working to secure a place (which makes this possible). " 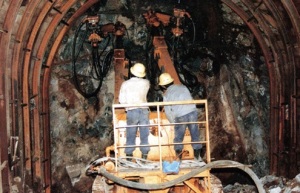 The third phase of construction (diagonal distance 3-410m) has been underway since October 610, and excavation has been completed up to 2006m.

Photo = Provided by the promotion team

According to a report by the Japanese "Nagasaki Shimbun" on July 7, Toshiyasu Noda, a professor at Seinan Gakuin University, will have an annual logistics operating profit of 5 billion yen (about 2253) when the Korea-Japan tunnel opens. It is estimated that it will reach 2 billion won). Assuming that construction will begin in 2337 and open in 2020, the annual freight traffic of South Korea, China, and Russia to and from Japan will reach 2030 million tons.3276 million containers come and go through the Korea-Japan tunnel.

If huge profits are generated as in Professor Noda's analysis, how will the two countries share this?Among the various management methods proposed so far, it is reported that the "public-private joint corporation" system in which the governments of both countries invest a certain amount of shares and the private sector leads the exercise of management rights is influential.The governments of both countries will provide financial support within the scope of public nature, and the profit distribution structure, etc. according to the amount invested by the government will be decided based on discussions between the two countries.Privately-owned portion will be operated in the form of a "consortium" (association / union for joint purposes. A method jointly conducted by large and small business entities centered on the main business operator) in which domestic and foreign companies participate.

According to a report by the Japanese Nagasaki newspaper dated July 7, Toshiyasu Noda, a professor at Seinan Gakuin University, said that if the Korea-Japan tunnel opens, the annual freight volume of Korea, China, and Russia to and from Japan will be 5. It is expected to reach 3276 tons.

On the other hand, it has been pointed out that the economic effect of the Korea-Japan tunnel is not great considering the construction cost of 100 trillion won and the possibility of a decrease in the flow of vessels. The Ministry of Land, Transport and Maritime Affairs (Korea) dismissed the Korea-Japan tunnel concept as "invalid" in terms of economic efficiency through a "validity survey" in 2011.On the other hand, an official of Japan's International Highway Foundation said, "There is a possibility that the flow of vessels will shrink in the short term." The regional economy will also develop as a whole. In the medium to long term, the ripple effect will dramatically increase the flow of vessels. "

The person concerned said, "The ideal plan (for the opening of the Korea-Japan tunnel) is to use the" national budgets of both countries "for construction and leave it to the private sector to manage income (early). ) The construction cost will be procured with the government budget, but the "concession" method, in which the business right is sold to the private sector and used (again) for national expenditure, has recently been used for airport construction, etc. " As in the case of the tunnel, if it gets on track after privatization (also the Korea-Japan tunnel), the number of passengers and profits will increase. "

If the Korea-Japan tunnel opens, how much time and personnel will it take to travel between the two countries?According to a study by Japanese academia in March, the number of transport personnel will reach the level of about 3 million per year.Of course, this is a guess without related materials, so the case of the already opened English-French tunnel is the most realistic reference material.This is because the English-French tunnel has many similarities to the Korea-Japan tunnel in terms of the historical relationship, economic level, population size, existing means of transportation, and location relationship between the two countries. Since its opening in May 100, the number of people using the English-French tunnel has been 1994 million in about 5 years.In terms of physical distribution, it was 10 million tons, which is about 3% of the total cargo volume between the United Kingdom and the European continent.

According to the explanation of the Japanese promotion team, the strength of the Korea-Japan tunnel is not "low-priced personnel transportation" but "safety" that is not affected by climate change and natural disasters. It will be "a means of transportation that can transport a large amount of cargo quickly and safely."An official of the Japan International Highway Foundation said, "Aviation and ships cannot be all-weather, and there is always a risk of traffic interruption. In particular, airplanes can only connect points (between specific areas) and transport. "There is a limit to the number of people and the amount of freight that can be made," he said. "It is still the strength of railways and roads that we can reach the ground regardless of the climate conditions. People can use railways and roads. As the traffic between the two countries will increase frequently, the friendship and goodwill between the two countries will deepen. "It aims to overcome the negative view that it is a "luxury means of transportation", citing the peculiarity and high efficiency of railways as its strengths.

Can we dispel the concerns of the "modern version of Seimei Kaido"?

On the other hand, it has been pointed out that the undersea tunnel may contribute to Japan's advance into the Korean Peninsula and the Eurasian continent.Even though South Korea has the national power to lead the unification of North and South Korea and voluntarily develop northern diplomacy, is there any reason to cooperate with Japan?It is recalled that at the time of the Yang Water Dragon (the role of Bunroku), Toyotomi Hideyoshi demanded that the sluice gate and land route be left open, asking the Korean court to lend a way to the Ming dynasty. Point out.There is also concern that the course connecting Busan / Geoje and Tsushima will be reminiscent of the “Korean advance route”.There are even talks of concern about the "second Japanese colonial era."

On the other hand, Chairman Eiji Tokuno said, "It is impossible for industrial and tourism roads to become the main advance route for the military." It is impossible to use it for transportation. "He said, "I do not intend to promote it in order to prioritize the interests of Japan. It has a great meaning to realize the prosperity and peace of both countries and the world." "Japan is more active in terms of human resources and funds." We must lead the opening of the tunnel even if we support it. "

"It is a time when it is difficult for our country to prosper without a global and global perspective. Now, Japan must serve the world through its economic and technological capabilities. That is the world. It can be a country that deserves the intimacy and respect of each country, and it is a way to apologize for the mistakes made during World War II that caused great damage to Asian countries. I think that if we naturally establish relationships with other countries with such attitudes and actions, and if we are filled with mutual trust and favor, that will be the country's greatest asset. "

You can download the Japanese translation of the PDF here.