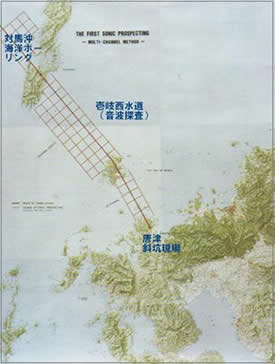 This survey planned a single-channel acoustic survey by Sparker and a seafloor topographical geological survey by side scan sonar.As a basic route in the Japan-Korea tunnel, Kyushu is expected to be a promising route from Higashimatsuura Peninsula in Saga Prefecture, passing through Iki Island, entering the south of Tsushima Island (Shimojima), and then from the vicinity of Gozaki on the west side to Geojedo Island on the South Korea side. ing.

The survey period is from May 62st to July 31st, XNUMX.

XNUMX. XNUMX.Ship position measurement
The ship position is measured by the two-distance association method using a radio wave positioning device (tri-sponder).The slave point uses a known reference point.Four substations will be used, and two stations suitable for ship position measurement will be selected at any time so that the two-distance meeting angle is within the range of 30 ° to 150 °.Data is printer output and magnetic tape input by XY converter.
The virtual origin of this exchange coordinate system used to improve work efficiency is
First system X = 152490.0 Y = -12191.3 θ = 320.0 °.

* Sound wave exploration using a sparker as a sound source

XNUMX. XNUMX.Echo sounding
Perform continuous sounding with an echo sounder (PDR-101 type). Insert a fixed line every XNUMX minutes to correspond to the wake.
Bar check is performed once a day or every time the recording paper or pen is changed.The depth is measured up to 50m every XNUMXm, "lowering" and "raising" twice.
For depths of 50 m or deeper, it is calculated from the revised curve obtained from data such as seawater temperature, pressure, and salt content.Draft is adjusted according to changes in draft.

XNUMX. XNUMX.Sonic exploration
Perform single-channel sound wave exploration using a sparker as a sound source.The energy source this time can be used from 200 to 8000 joules.Prior to the survey, a test run will be conducted on the ship speed, the magnitude of the focal energy, the towing length, depth, filter bandwidth, etc. of the spark array and hydrohorn, and the initial conditions suitable for the survey will be set.

XNUMX.Sound image seabed topography geological survey
Conduct a submarine sound wave survey using site scan sonar.Sound waves of 100 KHz / 500 KHz are oscillated in a fan shape from the inside of the towed device (Tufish) towed from the stern to the seabed.After receiving the reflected wave from the seabed and exchanging it for an electric signal, it performs oblique distance correction, amplitude correction, and ship speed correction and outputs it to recording paper.Also, the data will be recorded.

* Outline of the equipment of the research vessel

XNUMX.Test tide
During the survey period, the test tide record of Sasuna, Kamiagata Town, Tsushima will be used.
If the observation is done in a place without a tide station, determine an appropriate observation place and observe the tide height every 10 minutes up to XNUMX cm on a direct scale.The basic level of the waterway is measured and the basic level is calculated.It is used as the bathymetric correction value for echo sounding.