Belt and Road (the land and sea Silk Road economic zone) is the most notable initiative of China's diplomacy in 2015.The United Kingdom and Germany have announced their participation in the Asian Infrastructure Investment Bank (AIIB), followed by European countries.Immediately after, it was decided to jointly promote the economic corridors of China and Pakistan, and "One Belt, One Road" began to move.

3.1 World history is a battle between land and sea

"The history of the world is the battle between land and sea," said Carl Schmitt, a political scientist representing Germany in the first half of the 20th century. , Taiwan, Philippines, Indonesia, India and Australia, with a T-shaped base (Pacific Pacific Rim) and the Eurasian Continental Union (Silk Road Economic Zone) centered on China and Russia. ing.China is undoubtedly at an important economic turning point.However, the Spratly Islands are at the weakest point on the American side, where the horizontal and vertical sides of the T-shape intersect.

China's "One Belt, One Road" Start-The Country That Built the Great Wall

Following the Asian Infrastructure Investment Bank (AIIB), which is funding infrastructure development in the Silk Road economic zone, China is actively leading the Asian financial order.This aims to strengthen financial institutions in the territory and prevent the Asian currency crisis that occurred in the latter half of 1990. A new organization called the "Asia Financial Cooperation Association" is calling on countries to join, led by China. (As of March 2016.3)

Of the <Land and Sea Silk Road Economic Zone>, the construction of the <China-Pakistan Economic Corridor Figure 3.1> is that China, a land nation, has historically been afraid of the sea and is seeking a corridor to the sea.From Kashgar, Xinjiang Uighur Autonomous Region of China, to Gwadar Port in southwestern Pakistan, a total of about 3000 trillion yen will be spent on about 5 km to build the aorta of roads, railroads, power grids, and pipelines by 5000 years.The "Silk Road Fund" of the Asian Financial Association will make the first investment in the development of a hydroelectric power plant in the Central-Pacific Economic Corridor.China agrees with Pakistan to lease Gwadar port for 30 years.This is a detour corridor in the Straits of Malacca, Southeast Asia, which may be blocked in the event of an emergency.The land country paved the way for the sea corridor. (See Figures 43 and 3.1 Mainichi Shimbun)

China relies on the Middle East and Gulf countries for 8% of its imported crude oil, and if the land route from Kashgar to Gwadar is improved, it will be possible to avoid the Malacca Strait under the control of the US military.In January 2015, a pipeline connecting Kyaukpyu Port in Myanmar and Kunming in Yunnan Province was completed.

Saudi Arabia, China's largest importer of crude oil, has expressed its support for the modern Silk Road economy, "One Belt, One Road," with a total of 14 cases including cooperation with oil companies, cooperation in the construction of next-generation nuclear reactors, and establishment of a framework for anti-terrorism measures. It is said that the agreement was signed.

In addition, China has agreed to develop a high-speed railway in Iran, as shown in Figure 3.2E.In addition, ministers from both countries have signed XNUMX memorandums aimed at strengthening relations in a wide range of fields such as politics and economics.

3.2 Japan's Path-Bridge between Land and Sea

The effect of "collaborating" is greater than competing in a complex trade agreement.Complex "collaboration" can "emergent" "group synchrony" in diversity, a phenomenon expressed throughout the "swarm behavior" of life systems.

It has become a complex earth, and the content of negotiations is becoming more complicated.With many tariffs already low, the bargaining sector has expanded to include environmental standards, labor regularity and government procurement.Each country has its own cultural and political priorities, and it is not a simple tariff negotiation, but a complex adaptive system.

Strong political leadership is needed to overcome these difficulties and achieve trade agreements.However, when looking at US politics these days, it seems that many politicians advocate "economic isolationism."Republican presidential candidate Donald Trump claims to break all trade agreements and create trade barriers.José Mujica (former President of Uruguay) does not seek growth as a warning to the Japanese.He told me to seek happiness.

As the movement to prioritize trade liberalization at the regional level, which has strong economic ties around the world, is accelerating, former UK Trade and Investment Commissioner Andrew Khan argues that Huxley's "What to do right?" It is noteworthy that "I must learn if it is true" is being put into practice.

<In the world of trade, the idea that "if one wins, the other loses" must be said to be economic ignorance. We need politicians with the belief that free trade produces mutual benefits. > This means that trade that does not generate mutual benefits is not free trade.And isn't this the same as the teaching of Kinjiro Ninomiya?

In the name of globalization, all of us are controlled by globalization.US capitalism has become a "new financial nation" and has transformed into "financial securities capitalism where money produces money," says Mitsuharu Ito and Eiichi Shindo.Workers are a vicious cycle of "self-exploitation," in which lower wages increase working hours.Globalization, where money easily crosses national borders, is paying taxes by the people, while capitalists who monopolize the world's wealth are trying to increase their wealth indefinitely by playing with tax haven tax avoidance measures.Instead, as another form of "capitalism and collection", "optimal design that stabilizes unfairness that breaks social order, global environmental system design theory" cannot be realized with "emergent", that is, "group synchrony". Is it something?

The combination of populist policies that do not understand the complexity of society and popularity creates a more confusing and vicious cycle.Democracy has both an attempt to achieve the identity of sovereignty and sovereignty, and resistance to challenge the administration.Even if "innocent justice" like the Iraq War is justified by the word democracy, it is not good to cover it all.Therefore, the way Japan should go is to bridge the land and sea countries.

As the "fighting" of the land kingdom, China, Russia, Turkey, Germany, vs. the sea country, the United States, Japan, the Philippines, and Australia begins, the "form" of "cooperation" rather than war and competition is symbolized. "Construction of the Japan-Korea Tunnel" seems to be the most peaceful and economic development plan for the earth, both geopolitically and for the creation of a new economic frontier for the peninsula, South Korea, North Korea, and Japan.By doing so, it is possible to advance the world concept including energy production of "global environment system design".Wouldn't it be satisfying for capitalists if they invested there?Gold is a thing around the world. 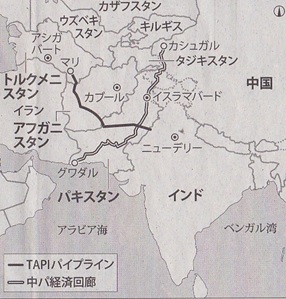 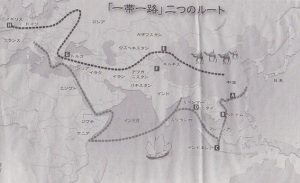 This treatise can be downloaded from the following.