Exclusive interview with Jim Rogers, one of the world's largest investors

A video revealing the Japan-Korea tunnel of the big project that he is paying attention to
In the interview
"This Japan-Korea tunnel project that connects Korea and Japan is one of the most exciting things in the coming century, because it will bring the two countries closer together, and once opened, all areas such as travel, tourism and business. Such projects are not so frequent in human history! "
Say 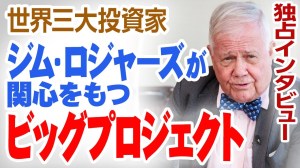