In order for Japan to survive for a long time, "creation of cultural science and technology" is indispensable.And if we export to many countries suffering from global disasters, we will contribute to world peace.

Recently, with the rapid increase in the frequency of meteorological changes such as earthquakes, tsunamis, mountain eruptions, intense heat, floods, landslides, and global warming, Japan is experiencing future phenomena (once it occurs, it will become a catastrophe, human life, and economics. We propose to the Ministry of Education, Culture, Sports, Science and Technology and the Ministry of Economy, Trade and Industry as "cultural technology" that should be launched as "disaster prevention / regeneration technology" for (large loss).

Another serious problem on the earth is the unilateral "collection" of all things and money, that is, the "semi-biological imbalance of the earth".The market fundamentalist economic theory is, in a nutshell, the theory of "creating a single environment of" collecting money "from a diversity environment", so everything is exactly the same as "financial collection". Try to (equalize behavior).According to the theory of complex adaptive systems, such a world also declines biologically and eventually reaches "ruin".When a complex system loses diversity, the crisis becomes deadly as it becomes desertification...A typical example of this is the 2008 economic collapse, which symbolically expresses that "the earth is finite" (for "viewing things", I, II, III, Katsuyuki Kawaguchi, "World Peace". Research ”, XNUMX).

Except for the events of the solar system, meteorite impacts, and nuclear war, the phenomenon of Earth's death would be the case when the above-mentioned climate change progresses slowly and sudden impact disasters are repeatedly given.Until then, while completing "life" and imagining "endless beauty", it disappears quietly.The artist may think so.However, the Kyushu boy, a warrior from Tsushima, Nagasaki Prefecture, who defended against a large army of XNUMX "formers" with more than XNUMX horses and all died against an artificial catastrophe, does not think so. right.

The impact of economic policy will become apparent in a relatively short period of time, but the impact of education policy, including technology improvement policy, will take a long time and will not appear immediately.Therefore, the trajectory is rarely corrected.Political-led educational reforms and financial centricity, which are being implemented one after another, are in great danger.In particular, the Ministry of Education, Culture, Sports, Science and Technology needs a person who can master science and technology.Children are moving away from science and technology, and poverty is progressing.In this situation, Japan, no, the earth will only sink.We have entered an era of negative interest rates, which is extremely difficult, from the era when we should have distributed profits.

Originally, the research and development was carried out by the Ministry of Education, Culture, Sports, Science and Technology, but the research team of the Japan Coast Guard Marine Information Department, which researched and researched the latest design basic data of cultural science and technology, published it in the English scientific journal Nature.It is the result of 10 years of data acquisition and analysis with a small budget. It is said that "unlike Europe and the United States, the true strength of the Japanese economy lies in <small and medium-sized enterprises>", but it is this kind of "that gives hope in the future rather than large enterprises and centralized organizations."A small on-site organization that makes decisions based on facts".

For the first time in the world, we clarified the distribution of strain accumulated on the bedrock plate of the seafloor in the hypocenter area of ​​the next major earthquake, the Nankai Trough megathrust earthquake.

In the first place, a huge earthquake occurs at the boundary where the sea-side plate burrows under the land-side plate due to the minute movement of the seafloor.Strain (strain) accumulates on the land plate that is pulled into the burrow, and an earthquake occurs when the distorted upper plate tries to return to its original state.The research team installed observation equipment at 6.1 locations on the seafloor from Shizuoka prefecture to Kochi prefecture in the hypocenter area, and investigated the crustal movements on the seafloor using an observation ship whose exact position can be determined.As shown in Figure 2006, as a result of analyzing the data for 15 years from 10 to 8.0, there is a "strong strain area" that accumulates about 1946 cm of strain annually in Enshu-nada, off the Kii Peninsula, and off the south of Shikoku. I found out that there was. The "strong strain area" extended further southwest from the epicenter area of ​​the assumed Tokai earthquake and the epicenter area of ​​the XNUMX Nankai earthquake with a magnitude of MXNUMX.

This is because Japan is a volcanic and earthquake-prone country.Under these circumstances, the Minister of Economy, Trade and Industry repeatedly said on TV that "the nuclear power plant is a base load plant."President TEPCO repeatedly said to the site, "Increase the operating rate."The world's energy production is an autonomous decentralized distributed energy utilization system, but intelligent design is unknown.

The Ministry of International Trade and Industry has been swallowed by the economy since it was named.This is the cause of children's disengagement from science and technology, child poverty, and business management turmoil.It was Japan that established "engineering" that united science and technology.The engineering character means the shape that supports the heavens.I'm watching with the feeling of praying.

Japan's shield tunnel excavation technology is evaluated as the best in the world as symbolized by the English-French tunnel (Kawasaki-Mitsubishi collaboration).Technology that enables safe tunnel excavation can be regarded as "disaster prevention technology" as it can be used as a shelter, shelter, waterway, human route, material supply channel, and as a tool for social development.If used properly, it can be used for disaster prevention, traffic, and safety, and I have never heard of it being damaged by an earthquake.

The International Highway Foundation is conducting a survey of the seismic zone on the seafloor near the assumed sea area passage of the Japan-Korea Tunnel.According to Masuo Oe, the president of the foundation, ultrasonic exploration of the 20m seafloor is carried out at 5km and 1000km mesh (square eyes) to create an active fault distribution map (Fig. 6.2).It is said that it introduced an experimental ship equipped with a water gun system and spent a total of 10 years to collect seafloor data for a total of 10 billion yen.

Needless to say, if there is such basic design data, it will be possible to design the safety of long tunnels.

In this way, although the basic design data of the seafloor underground is being collected by the efforts of the site side, it is being discussed as the location condition of the new nuclear power plant, such as earthquakes in the onshore volcanic belt and events suggesting the possibility of eruption. However, little is known to the general public.

There are more than 2000 active faults nationwide.Using GPS (Global Positioning System), Takuya Nishimura of the Kyoto University Disaster Prevention Research Institute confirmed that the epicenter of the Kumamoto earthquakes, including aftershocks, is in a zone where ground strain is likely to accumulate.Strain accumulates when the ground is constantly compressed or pulled and force is applied.

When it becomes unbearable and the bedrock is destroyed, an earthquake occurs.Figure 6.1 (b) also shows the distribution of active faults, but no active faults have been found in Tottori and Miyazaki, even though strains have accumulated and strong earthquakes have occurred.In Kumamoto, the active fault and the strain zone coincide.It teaches that not only active fault areas but also strain accumulation should pay attention to disaster prevention measures such as the probability of earthquake occurrence.

In the case of the northern section of the Futagawa fault zone, which had a large magnitude due to the Kumamoto earthquake, the Headquarters for Earthquake Research Promotion announced the evaluation result that the activity probability of active faults within 30 years was 0.9%.Even if the number itself seems to be as low as 0.9%, it is a serious problem to say that it is 5 to XNUMX times higher than the probability of a traffic accident or fire accident.Observation data clearly show that the damage and damage to the buildings above the active fault and its vicinity were large.Kumamoto Prefecture has been relieved because the numbers are low and has been promoting the attraction of companies, but I was relieved because I had never experienced a big earthquake, and I regretted that this was the result.

What is interesting is the relationship between active faults and roads.In the part where the active fault shifts, the bedrocks rub against each other and become weak, and rock powder accumulates and is easily eroded.The result is a straight valley terrain, which has been used as a highway since ancient times.

The Saba Kaido, which connects Wakasa and Kyoto, is one of them, and is located along the Hanaori Fault Zone.It is said that the Chugoku Expressway, the Yamazaki Fault Zone, and the Shikoku Crossing Expressway also follow the Median Tectonic Line Fault Zone.

Can we manage to utilize the beauty, spirituality, and potential (magma power) of "Fujiyama"?Unzen's Samantabhadra, Kiso's Ontake, Mt. Mihara, and Mt.

I don't know when Fujiyama will explode.Once it explodes, the damage is immeasurable.The main purpose of the design is to "establish a method to prevent eruption" of the eruption system of the Fire Mountains, and use the ejected gas for "electric heat combined high efficiency gas turbine" and steam for "geothermal power generation" to create a region. We propose that a raw form of “preservation of cultural heritage through energy production and enhanced safety” should be constructed from a long-term perspective (Fig. 6.3).

This is because it leads to the creation of new "cultural technology" through the fusion of science and technology and art.In short, "gas venting power generation" is carried out from the fire mountains where there is a risk of eruption.Gas turbines are suitable as distributed energy sources because they do not require water and are lightweight and powerful.

Above all, it is to equip elementary school students who are full of curiosity with knowledge and preparation for natural disasters.Before English education, we must recognize that Japan is such a country. There is no need to let "children" learn the language of a country that does not have words like "lose but win". 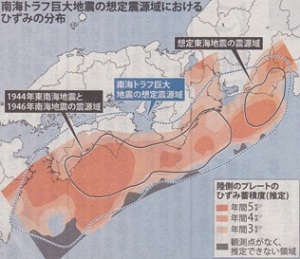 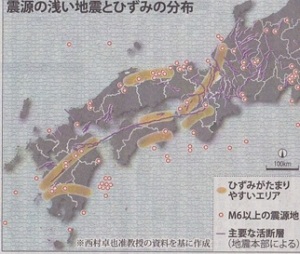 Examples of earthquakes of M6 or above <Iida 2016> 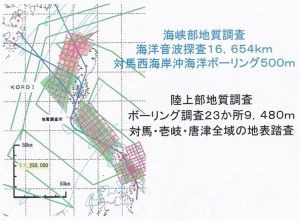 Figure 6.2 Geological survey of the straits and surface of Tsushima, Iki, and Karatsu 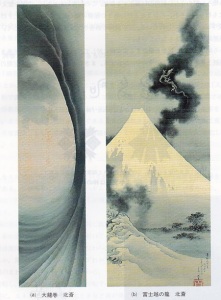 Figure 6.3 The world seen from the inside of Hokusai's Great Dragon Roll and the flight of the dragon that calls the whirlpool of Fujikoshi