The construction of the Korea-Japan Undersea Tunnel will be actively utilized as a shortcut for peace and prosperity in Northeast Asia, triggered by the Northeast Asia Olympic Relay, which started from the 2018 Pyeongchang Winter Olympics and continues to the 2020 Tokyo Summer Olympics and 2022 Beijing. There are voices saying that it needs to be done. 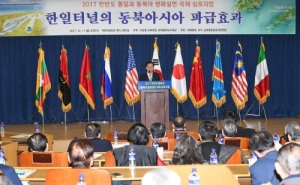 Sekai Nippo President Cha Jun-young congratulates at the "11 International Symposium on the Unification of the Korean Peninsula and the Realization of Peace in Northeast Asia-The Spillover Effect of the Korea-Japan Tunnel" held at the Yeouido Parliamentary Hall in Seoul on the afternoon of the 2017th. To state

Shin Chang-chul, a professor of Japanese literature at the Department of Japanese Literature, will hold the World Peace Road Foundation (Korea Chairman Song Gwang-suk) and Lee Chan-yul Parliamentary Office on the 11th. At the "2017 International Symposium on the Unification of the Korean Peninsula and the Realization of Peace in Northeast Asia" co-sponsored under the theme of "The Ripple Effect of the Korea-Japan Tunnel in Northeast Asia", "If the Korea-Japan Undersea Tunnel is constructed, it will be connected to the Korea Peninsula Transit Railway (TKR). After passing through China, Mongolia, and Russia, the Eurasian Continent will be connected by rail traffic. ”“ The butterfly effect can contribute to the constant peace and stability of Northeast Asia, and of course, the Korean Peninsula is located in the center of Northeast Asia. South Korea will be the most beneficiary country. "Professor Shin emphasized that the Korea-Japan tunnel will be an opportunity for the people of both countries to renew their awareness of history and will be a shortcut for resolving the conflict of territorial disputes and building a future-oriented Korea-Japan relationship.
Professor Shin analyzed that Japan should share 70% of the construction cost and South Korea about 30% of the construction cost based on the territory.The distance between Geojedo or Busan in South Korea and Tsushima in Japan is about 50km, and the section that South Korea bears as a standard on the high seas is only about 25km.The estimated construction period is 10 to 15 years, and the total construction cost is estimated to be 100 trillion won. 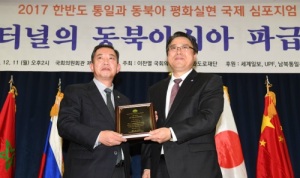 On this day, Honorary Chairman of the Korea Diplomacy Association, Moon Jae-in, who assumed the chair of the symposium, said, "Next year, the" Korea-Japan Joint Declaration of Kim Dae-Jung and Obuchi "for a new Korea-Japan partnership toward the 21st century will celebrate its 20th anniversary." "President Moon Jae-in and Prime Minister Shinzo Abe will announce new Korea-Japan relations next year, but I think the most important project is the Korea-Japan tunnel construction project," said a large participant. I received applause.

Shinichiro Nagano, Professor Emeritus of Daito Bunka University, said, "The construction of the Korea-Japan tunnel will contribute to the peace and stability of the Northeast Asian region, including the Korean Peninsula." At the great opportunity of the Winter Olympics, cooperation with each other will accelerate the realization of the Korea-Japan tunnel and peace in Northeast Asia. "

In a congratulatory speech on this day, Rep. Lee Chan-yul (elected by Suwon City, the National Party) said, “The need for the Korea-Japan Undersea Tunnel was first raised in politics in 1990, and since then, former President Kim Dae-Jung, Roh Moo-hyun, and Lee Myung-bak have also affirmed. "The Korea-Japan Undersea Tunnel is to open up a new future for the Republic of Korea, and more importantly, a new horizon for Northeast Asia, beyond the economic revitalization of specific regions, which is a loss for South Korea and Japan." There is no such thing. "Rep. Lim Johnson (both Democratic Party of Korea, Gwangju, Gyeonggi-do) said, "Like the construction of the Eurotunnel between Britain and France, which had historically been an enemy relationship, and the start of the European community, Korea and Japan I hope that connecting Gwangju with a tunnel will be a signal of a new history toward joint prosperity and peace, as opposed to the history spelled out in the past invasion, conflict and conflict. " 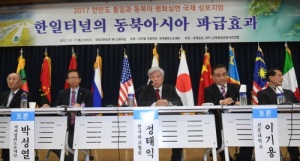 Chairman Song Gwang-suk said, “The reason why Sun Myung Moon, the founder of the World Peace Road Foundation, and Hak Ja Han Moon advocated the International Peace Expressway was to connect the world to one transportation network and realize peace in the global village. "The Korea-Japan tunnel means that Japan will clear up the bad ties of the past and move on to a new future, and South Korea will grow as a central nation of Northeast Asia through reconciliation and forgiveness." I talked to him.

On this day, two lawmakers, Lee Chan-yul and Lim Johnson, accepted the advisory position of the World Peace Road Foundation and were commissioned to actively cooperate with the Korea-Japan Undersea Tunnel Promotion Project.