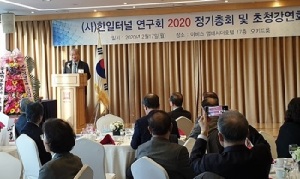 The "2020 Regular General Assembly and Invited Lecture" of the Japan-Korea Tunnel Research Institute will be held on the 17th in Busan Ibisuan.
It was held at the Bassada Hotel with more than 150 participants including members.

On this day, Kim In-ho, the president of the Market Economy Research Institute, who was the former president of Cheong Wa Dae and the director of the Trade Association, was specially invited to the regular general meeting and gave a special lecture on the theme of "a desirable future vision of Korea-Japan economic relations." , Attracted attention.

In a lecture, President Kim said, "Northeast Asia is currently undergoing a reorganization of economic order centered on South Korea, China, and Japan since World War II, but the major countries surrounding the Korean Peninsula are Northeast Asia. "The appearance of starting a power struggle to occupy the superiority", "China's economic rise and ambition to become the world's supremacy, the so-called" Chinese dream ", deepens the conflict with the United States and neighboring countries. "It was revealed.

“But our government's position and efforts to deal with this reality are far from the obvious of establishing efficient relationships, and the deep worries of intellectuals,” said Kim. It has become a problem that causes the problem. " 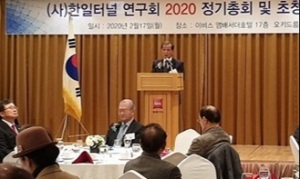 ▲ Lee Young-Hum, co-representative of the Korea-Japan Tunnel Study Group, is giving a greeting.

Finally, Chairman Kim said, "Despite the various difficulties of many years, the construction of a Korea-Japan undersea tunnel that can dramatically improve relations between Korea and Japan at this time, which is the starting point for opening a new 50 years between Korea and Japan. The lecture ended with the beautiful words, "I pay tribute to the efforts of the Korea-Japan Tunnel Research Institute and its members, who have made multifaceted efforts on a private level."

Busan = Jung Sang-hu reporter
This is a Japanese translation of the original Korean text of the Sekai Nippo on February 2020, 2.
The relationship between Korea and Japan is getting worse ... We have to focus on improving the relationship from a future-oriented standpoint.