The "Japan-Korea Undersea Tunnel" concept was originally conceived by Japan

Without any warning, the story of the Japan-Korea Undersea Tunnel suddenly emerged when Kim Chong-in, the representative of the opposition "People Power Party," visited Busan on February XNUMX, and the ruling party announced the construction of a new Gadeokdo airport as an election measure. The cause seems to be the pledge to build a Japan-Korea undersea tunnel connecting Gadeokdo and Kyushu in Japan as a countermeasure against this.

The ruling Democratic Party of Korea has accused Kim of "a pro-Japanese pledge that the DNA of Japanophilia has been activated" over the controversy over the submarine tunnel that was raised without the knowledge of Japan, but "the power of the people" is "pro-Japan." If you label it as an act of interest, former President Roh Moo-hyun, who was assisted by President Moon Jae-in as the secretary general, also advocated an undersea tunnel, so it would be Japanophilia. "

The Japan-Korea Undersea Tunnel, which connects Busan and Kyushu in South Korea, is neither a conservative idea nor a "proprietary patent."This is the long-term vision of South Korea that successive presidents have mentioned, regardless of progress or maintenance.

President Roh Tae-woo first mentioned the Japan-Korea Undersea Tunnel in a parliamentary speech when he visited Japan in XNUMX, and he approached Prime Minister Toshiki Kaifu (then) for joint construction.When President Kim Dae Jung came to Japan in September XNUMX, he said in September XNUMX, "If the Japan-Korea tunnel is constructed, it will connect Hokkaido to Europe, so it is a problem to think about as a future dream." It was advocated by Prime Minister Yoshiro Mori (at that time).

In addition, the successor President Roh Moo-hyun also proposed the construction of a tunnel to Prime Minister Junichiro Koizumi (at that time) at the Japan-Korea summit meeting held in February XNUMX, and the successor President Lee Myung-bak also proposed a long-term undersea tunnel in December XNUMX. He expressed the basic concept of national land development that included "research on economic and technical validity" as an issue to be examined.

Deputy Prime Minister Taro Aso also agreed to establish a "Japan-Korea New Era Joint Research Project" at a summit meeting with President Lee Myung-bak in XNUMX when he was Prime Minister.In October XNUMX, the Ministry of Foreign Affairs issued a proposal for the "new era of Japan and South Korea" (construction of a complex network for symbiosis), in which the following proposals were made regarding "long-term promotion of the Japan-Korea Undersea Tunnel Concept". Was

"The English-French submarine tunnel that connects the Strait of Dover plays a role of connecting the island nation of the United Kingdom and the entire European continent, as well as expanding human flow and logistics between the British and French. It connects the Kitakyushu region with the Busan and Mayama regions. The construction of the Japan-Korea Submarine Tunnel should not only contribute to the expansion of human flow and logistics between Japan and South Korea, but should also be a project that connects the island nation of Japan and the entire Asian continent. From the perspective of trilateral exchange between Japan, China and South Korea, we must highly appreciate the external mutual exchange effect of this plan. "

"Also, the Japan-Korea Undersea Tunnel is not unique to both Japan and South Korea. If it passes through North Korea and connects to Shenyang in the northeastern region of China, the Northeast Asian railway network of the three countries of Japan, China and South Korea will be connected to Siberia. You can reach Europe via the railroad. "
In the first place, this "Japan-Korea Undersea Tunnel" was a concept on the Japanese side.

In XNUMX, before the war, JR's predecessor, the Japanese National Railways, launched the "Japan-Europe Railway Concept."It was a grand idea to connect Kyushu-Korean Peninsula-Mukden-Beijing-Per Mille Plateau-Eastern Boule-Orient Express to connect Europe.In fact, six years later, in XNUMX, I started exploring Iki and Tsushima in Nagasaki Prefecture, and started bowling in Yobuko-cho, Saga Prefecture.However, he was frustrated by the outbreak of the Pacific War.

Under the current situation of sharp conflict over Takeshima, no matter how much noise is made in Korea, the "Japan-Korea Undersea Tunnel" concept is just a "painted rice cake" that is not feasible. 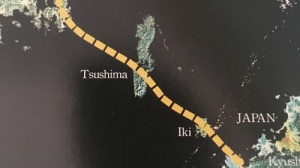 Please see the linked page for the full article

The "Japan-Korea Undersea Tunnel" concept, which is the issue of the Busan mayoral election, was originally a Japanese idea!