Site office set up in Iki-July issue of site news

The first building on the Iki / Ashibe Slope site, which was only land, opened a field office on June XNUMX

On June XNUMX, a field office was set up at the Ashibe Slope site in Iki, and the opening ceremony was held.
The Ashibe site will be a relay site connecting Karatsu and Tsushima.Located on the east coast of the island, it is a work pit for surveying and excavating the main pit that goes north along the east coast of the island, and is an important site that will be the front line of maintenance and inspection after the tunnel is completed.

It was obtained early as a tunnel site.All we had to do was wait for the full-scale tunnel excavation work following the road maintenance and precision surveying for the construction of the wellhead for large vehicles, but now that the site office has been set up, the next step is the wellhead installation work.This was achieved this time by adding the reserves so far to the kindness of the local tunnel supporters and moving forward.

On this day when the summer sky shines, a ceremony was held from XNUMX am, followed by a greeting from the Highway Foundation adviser and a progress report by Director Shohachi Matsumura, followed by a letter of appreciation from Masayoshi Kajiguri, the president of the foundation.The supporters of the island also rushed in, and at the end, everyone brought in the office desk and sweated, and celebrated by chanting three hurrays in hopes of early construction.With a private beach, it is fully equipped with electricity, water, and toilets, and is ready to operate as a campsite. 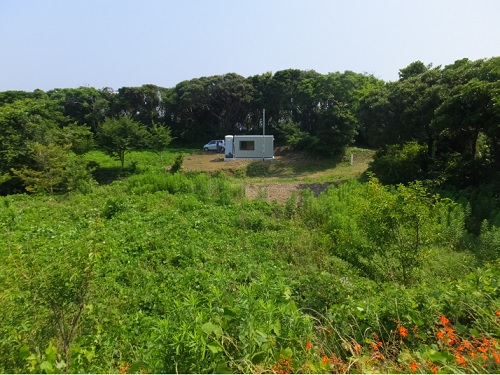 [Photo XNUMX] A site office was set up at the Iki / Ashibe Slope site Next is the wellhead installation work in the grass in the foreground! 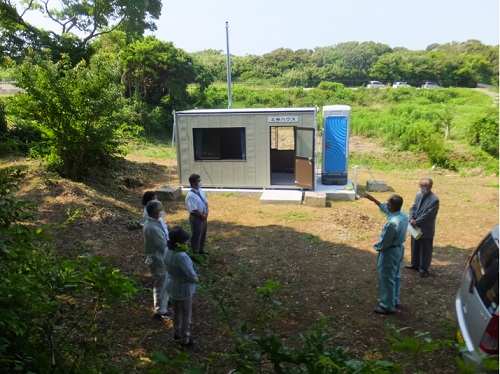 [Photo XNUMX] The office built ahead of schedule heralds the start of full-scale construction.