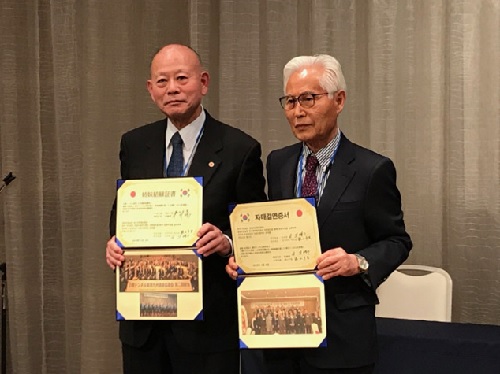 On the afternoon of the XNUMXth, in Fukuoka, Japan, the co-representative of the Korea-Japan Tunnel Study Group Seo Witek (on the right) and the Japan-Korea Tunnel Realization Kyushu Liaison Council have signed a sisterhood agreement.Reporter Min So Young

Research groups from both countries gathered in Japan and Fukuoka over the Korea-Japan submarine tunnel construction plan, which has been controversial for more than 10 years, and reaffirmed their consciousness of business promotion.

The Korea-Japan Tunnel Study Group was established in 2008, and the Japan-Korea Tunnel Realization Kyushu Liaison Council was established in 2016, and has appealed the legitimacy of undersea tunnel construction at home and abroad.The sisterhood relationship between the two groups was realized by the Korean side proposing to the Japanese side.An official of the study group said, "The purpose is for active exchange between South Korea and Japan with the goal of constructing a Korea-Japan tunnel."
On this day, at the sisterhood ceremony, there was also a proposal to change the name to "Asia Undersea Tunnel" instead of Korea-Japan Tunnel and Japan-Korea Tunnel, such as "Euro Tunnel" which is a submarine tunnel connecting Britain and France. It was issued.

The above Korean original PDF can be downloaded from here.

The above Japanese translation PDF can be downloaded from here.