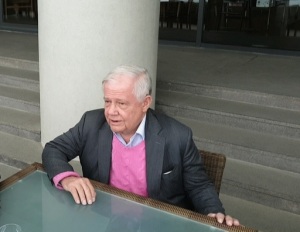 Chairman Jim Rogers explains why he should invest in Korea and North Korea at the Ananti Cove Pent House in Gijang-gun, Busan on the morning of the 21st.

"The Korea-Japan Undersea Tunnel will be an important project that attracts attention on the unified Korean Peninsula."

Global investment expert Jim Rogers (77), chairman of Rogers Holdings, said in a solo interview with Sekai Nippo on the 21st at the Ananticove Penthouse in Gijang, Busan. ..

The "Korea-Japan Undersea Tunnel" is being promoted by the Korea-Japan Tunnel Research Association (co-representatives: Lee Young-hum and Seo Wy-taek).It connects Busan and Geojedo to Karatsu City, Saga Prefecture, Kyushu, Japan via Tsushima.The total length reaches 209-231km (submarine section 128-145km).The feature is that instead of connecting the whole with a single large tunnel, small tunnels made by dividing the section for each waypoint are connected. It is a peace project started in November 1981 by President Sun Myung Moon of the Unification Church of the World Peace, advocating the "International Highway" plan at the 11th International Conference on Science and Unity (ICUS).Since then, President Hak Ja Han Moon of the Family Union has continuously promoted this project as part of the construction of the "Peace Road," a world peace highway.It is estimated that the construction of the undersea tunnel will take 10 to 10 years and the project cost will be 15 trillion won to 62 trillion won.

After the unification, Chairman Rogers sees the Korean Peninsula as an important hub for global transportation and logistics.If the north-south railroads are connected through the Donghae and So-hye lines, it will connect to Europe as well as China and Russia.He emphasized, "If the Korea-Japan Undersea Tunnel is opened, it will be possible to travel by land from Tokyo, Japan to Berlin, Germany. That alone will create enormous economic value."He added, "(If it becomes unified South Korea) it will not only be happy from the standpoint of Japan. I think that Japan may be less likely to compete with unified South Korea." 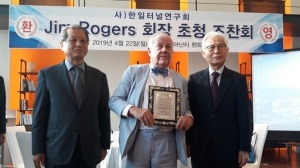 Rogers predicted that the tourism industry would develop significantly, especially in “Unified Korea”.He said, "North Korea has not developed in terms of tourism for decades and was not open to the public during that time. Also, in the United States and Europe, South Korea was not considered as a tourist destination." Will try to visit South Korea and North Korea first. "At the same time, he predicted that "Unified South Korea will be the most interesting country in the world."

"North Korea has an educated and cheap labor force, abundant natural environment and underground resources, but it has not been able to develop enough to make full use of it. South Korea has capital and production facilities. "We have a management experience of operating the company," he said. "By making a lot of investment in the Korean Peninsula, we will have an important position in terms of geopolitics."He reiterated, "I'm not happy to hear from the Korean people. The Korean Peninsula will be the most interesting and dynamic place in the world in the next 10 to 20 years."

"I don't think the world economy will improve in a year or two, but the Korean Peninsula will be less affected by these forecasts," he said. "If the North-South exchange begins, more economic benefits will be generated. Innumerable investments and prosperity can be made. Korea will have the opportunity to "add more good things to good things". "

Rogers, who has announced his intention to invest aggressively in North Korea for several years, said, "It is difficult to predict when South Korea and North Korea will be unified, but it can be suddenly erased by a certain inertial force. It can change suddenly like an impossible fire, "he said." I am convinced that the era of such "unified Korea" will come. "

He was nominated as an honorary advisor to the Japan-Korea Tunnel Research Institute on the 22nd.He also received an honorary doctorate from Busan University for his contribution to creating a peaceful atmosphere on the Korean Peninsula.He received a PhD in Philosophy rather than Business Administration or Economics because of his deep interest in and knowledge of history and philosophy.Rogers received a Bachelor of History degree (1966) from Yale University before receiving a Bachelor of Economics degree (1964) from Oxford University.After the bachelor's degree conferment ceremony, a special lecture was given to students on the theme of "Unification and Future of the Korean Peninsula", and this afternoon, at the invitation of BNK Busan Bank, a lecture was given at the Busan Bank head office with the same content.

◆ Chairman Jim Rogers is called the world's three largest investors along with Warren Buffett and George Soros.Originally from Alabama, USA, he is famous for his first business of selling peanuts and collecting empty bottles at a baseball stadium when he was young.After studying history at Balliol College, Oxford, USA, and philosophy, politics, and economics at Balliol College, Oxford, England, he worked on Wall Street.He established the hedge fund "Quantum Fund" with George Soros and made a name for himself as a global investor with an astonishing rate of return of 3% for 10 years.After leaving the Quantum Fund, he successfully traveled around the world three times and became an adventurer. Rogers, who emigrated to Singapore after selling his New York home in 4200, focused on the value of Asia. In 3, at an investment briefing held in the United Kingdom, he stated that he would like to invest all his property in North Korea if possible, and became a hot topic.

This is a Japanese translation of the original Korean text of the Sekai Nippo on February 2019, 4.
Jim Rogers "Korea-Japan Undersea Tunnel is a Big Project on the Korean Peninsula"

The above Korean original PDF can be downloaded from here.