"Busan needs an undersea tunnel to become the center of the Pan-Japan Sea economic zone." Busan will embark on a research role this year to analyze the adequacy of the Korea-Japan undersea tunnel construction.The pros and cons are expected to heat up when the construction of an undersea tunnel is publicized in a situation where diplomatic relations between the two countries have deteriorated due to the installation of a statue of a girl of peace in front of the Japanese Consulate.

Korea-Japan Undersea Tunnel The construction site of the undersea tunnel in Karatsu, Saga Prefecture, Kyushu, which is the starting point on the Japanese side. 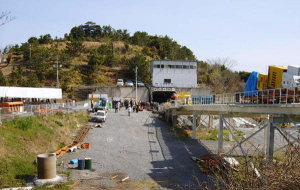 Busan City held a "10 Policy Concert" in attendance by Mayor Seo Byung-soo on the 2017th, "Basic research for the construction of the Korea-Japan Undersea Tunnel, which is one of the development strategies for the West Busan area, 3 It will be held for one year from the month. "The construction of an undersea tunnel is one of the 1 major projects of the "2015 West Busan Global City Grand Plan" announced by the city in 2030.

It reflects the mayor's will because an undersea tunnel is needed for Busan to become the center of the Pan-Japan Sea economic zone that connects South Korea, North Korea, China, Japan, and Russia.Employment costs are 1 million won.

The main research contents are ▷ Analysis of the impact of the Japan-Korea Undersea Tunnel on the Busan economy ▷ Public awareness survey ▷ Feasible routes.Earlier, the Busan Development Research Institute (BDI) once presented the route from Gangseo-gu, Busan-Gadeokdo-Japan Tsushima-Iki no Shima-Fukuoka (2009 km, project cost 222.64 trillion won) in 92.It was found that the Japanese side prefers the route of Kyushu Karatsu-Iki Island-Tsushima-Geojedo-Gadeokdo-Busan (288 km, project cost 100 trillion won).

The key is the public sentiment towards the undersea tunnel.Experts also argued that the undersea tunnel would become a symbol of joint prosperity between Japan and South Korea as well as economic exchange, and that it would serve as a passage for Japan to advance into the continent. This is because the counterargument that "there is no such thing" is evenly opposed.The recent intensification of diplomatic conflict between Korea and Japan in the installation of the Busan Girl Statue is also expected to affect the spread of negative perceptions of the undersea tunnel.

Translated the article of the international newspaper January 2017, 1