Development and prospects for the northern part of Kyushu

The Japanese side of the Japan-Korea Tunnel is the area centered around these four cities: Karatsu City, Taku City and Fukuoka City on the Higashi Matsuura Peninsula in northern Kyushu, and Tosu City, which connects Fukuoka and Taku at right angles.The entrance on the Japanese side of the Japan-Korea tunnel will be supported by four points.These four urban areas are almost square.While looking at these physical connections, I would like to give an overview of each history, terrain, culture, industry, etc.Of the four urban areas, Fukuoka City, which is not directly affected by the tunnel and is growing as a large city, will be excluded from the elucidation and will be positioned as the mother city of the other three areas.

The Karatsu / Higashimatsuura area is the gateway to the Japan-Korea tunnel.This area has long had exchanges with the continent and has been a point of contact with continental culture.At the same time, like Tsushima and Iki, they have been at risk of invasion by foreign enemies such as the Mongol invasion.It was the base for Toyotomi Hideyoshi's dispatch to Korea, and the ruins of Nagoya Castle are the ruins.In the Middle Ages, the Matsuura Party gained power, and after becoming the Tokugawa Shogunate, the Meiji era came as the territory of the Nabeshima clan, most of whom were foreigners.Although the Karatsu domain is a small domain, the daimyo are frequently replaced, and it has a different atmosphere from the Ariake Sea side, which fosters today's enthusiastic Karatsu popularity.The coastal area is a rias-style coast with a lot of traffic, and is blessed with scenic beauty and is included in the Genkai Quasi-National Park.The course connecting Karatsu to Fukuoka through Saikai National Park and Unzen through Sasebo is an international tourism route.

The northern and western parts of the Higashimatsuura Peninsula are surrounded by ria coasts, and the inside of the peninsula is a wavy table plateau called a "plateau".The climate is mild, with little rainfall and few rivers.The industry is centered on upland farming, especially in Hizen, Genkai, and Chinzei.There are many small-scale farmers and land productivity is low.The industries are food industry, general equipment manufacturing, wood products, etc.Karatsu City occupies the main body of regional industry.The fishing industry is most prosperous in Yobuko-cho, which has a fishing port, and is coast-dependent, such as purse seine, aguri net, small trawling net, carrelet, and sardine fishing.In recent years, the cultivation of pearls, yellowtail, sea bream, abalone, and sea urchin has become popular.There are many excavated items such as stone tools, earthenware, and ancient vases on the Higashimatsuura Peninsula, and many legends and romance have been handed down as well as traces of ancestors from the Jomon period. According to the "Wei Shi Yajinden", it formed the "Sue Rogoku" in the XNUMXrd century.However, in modern times, the peninsula's characteristic of being a dead end of traffic has left it behind economic and social development.Fortunately, however, the peninsula is not swallowed by the waves of development, and there are beautiful coastlines and undeveloped islands. 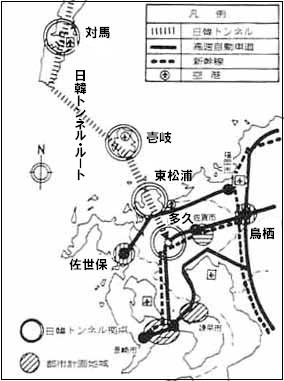 After the opening of the Japan-Korea tunnel, the restrictions will be reversed.Since it will be a gateway to the continent, it will be possible to develop and maintain it as an international recreation zone by taking advantage of its resort characteristics.Karatsu City is trying to develop as an industrial city by taking advantage of the ancient tradition of pottery called Karatsu ware.Pottery is about to be reborn as a new ceramics industry.It is also blessed with resources as a resort tourist city.It will be positioned as a "Genkai Coastal Resort" along with the Higashi Matsuura area.

As a future plan, the Yobuko / Chinzei Zone is also directly under the entrance of the Japan-Korea Tunnel, so it will be raised as a world-class resort base with an ultra-luxury marina.A mooring port for large cruisers, yachts and motorboats will be established.Then, on Kabe Island and the island, a villa area will be formed by a group of white buildings such as those on the coast and islands of the Mediterranean Sea and the Aegean Sea in Europe.In these luxury villas, we will form a resort that can accommodate not only Japanese but also people from East Asia, Europe and the United States.A three- to four-story condominium will be built around the marina to form a marine shopping zone.

Then, a detached villa will be built in a scenic area on the coast and inland.The terrain of the Higashi Matsuura Peninsula is gently undulating, so it is suitable for golf courses.Converting forests and some agricultural land, golf courses will be built in several places.Adjacent to it, a tennis court, swimming pool, aerobics center, etc. will be set up.

Taku City is located in the center of Saga Prefecture and is a basin surrounded by mountains of about XNUMX to XNUMX m in the Tsukushi Mountains.Rivers originating from the surrounding mountains flow into the Taku River, which runs through the center of the city.Mandarin oranges are cultivated at the foot of the mountain.The history of Taku prospered by mining coal mines before the Meiji Restoration, and the Karatsu Line opened early, and it has developed dramatically in the Meiji, Taisho, and Showa eras.However, since the coal mine was closed, the population has declined sharply, and we are trying to transform into a rural industrial city that uses the ruins of the coal mine and agriculture at the foot of the mountain.With the completion of the Kyushu crossing road and the interchange on the outskirts of Taku City, it became the gateway to the center of the prefecture.This is the key to the development of the city into the XNUMXst century.The Confucius Temple is the oldest existing Confucius Temple in the world and is designated as a national important cultural property.It has been a place of education since ancient times, and has a foundation to develop as a "science park city" in the future. 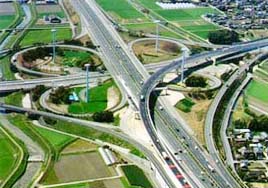 Tosu City is the eastern gateway to Saga Prefecture.It borders Fukuoka Prefecture and is a junction of the Nagasaki Main Line and Kagoshima Main Line of JR Kyushu, and has been a transportation hub since ancient times under the Ritsuryo system.In recent years, there is one of Japan's largest interchanges on the Kyushu Expressway, making it the most important point for land transportation in Kyushu.In addition to the good transportation location, Tosu City has a thriving industry and boasts the highest industrial shipment value in the prefecture, surpassing Saga City.Together with the neighboring city of Kurume, it has been designated as "Kurume / Tosu Technopolis" and is aiming to develop as one of the leading new industry areas in Kyushu.

If the Japan-Korea Tunnel opens, Taku City will become a node with the Kyushu Crossing Road.This area is blessed with a warm climate because the cold winds from the Sea of ​​Japan are blocked by the mountains.In the area connecting Taku and Tosu, we will attract factories and research institutes of advanced industries to form Taku and Tosu Silicon Valley, which is as good as Silicon Valley in California, USA.In the surrounding area, industrial-related housing, sports facilities, and resort-type housing will be placed in the work-dwelling approach zone.The Yoshinogari ruins, which are said to be the ancient capital of Yamatai, are important ruins for tracing the roots of Japanese culture.The "Yamatai National History Museum" will be built here to introduce the ancient culture of Japan.

The impact and effects of connecting the Japan-Korea tunnel to Tsushima, Iki, and northern Kyushu are immeasurable.This region needs to be developed integrally as a base square in East Asia (a receiving base for quadrupole structures).So to speak, it will be necessary to create a master plan that corresponds to the national land plan for the entire Kyushu region.With the completion of the Japan-Korea Tunnel, as was the case in Kitakyushu in ancient times, the region will become a major hub for international exchange between Japan and Asia.In particular, East Asia is the region with the most dynamism in the XNUMXst century, and the point of its economic growth is economic and technological exchange with Japan, so the importance of this international exchange base opened in East Asia is emphasized. There is something missing.Japan, which has been in Europe for a long time since the Meiji Restoration, is about to enter a new era of departure from Europe.